DR. GEORGE NEFF, Professor of Art at Glassboro State College created his first drawing of Holly Bush, in pencil, several years before the summit meeting. From this original work, two additional drawings were rendered in pen and ink during the conference to be presented to the world leaders on behalf of the Glassboro Chamber of Commerce and the Faculty Association of Glassboro State College. Security precautions prevented this presentation. However, the first pen and ink drawing was personally presented to President Johnson in the White House on July 12, 1967 by Dr. Neff. The second drawing was carried to the Soviet Union by Dr. Neff as a member of a delegation of house has sheltered in earlier times such visitors as Colonel Theodore Roosevelt (May 5, 1912) and President William Howard Taft (May 27, 1912). Since 1917, when Holly Bush and 25 surrounding acres were purchased by the state of New Jersey, the mansion has been the campus home of the presidents of Glassboro State College.

On June 23, 1967, the eyes of the world focused on Holly Bush as the grand old house and it's residents, Dr. and Mrs. Thomas Robinson, hosted the world summit conference between President Lyndon B. Johnson of the U.S.A. and Premier Alexei N. Kosygin of the U.S.S.R.

Glassboro citizens which toured Russia to return Mr. Kosygin's visit. Dr. Neff presented this drawing to a representative for the Soviet Premier on August 3, 1967, in Moscow, U.S.S.R. Mr. Kosygin sent his regards via telegram from Moscow to Glassboro, expressing his appreciation for the drawing of Holly Bush.

Reproductions of Dr. Neff's Holly Bush drawing have been presented personally to Richard Hughes, Governor of New Jersey, Lewellyn Thompson, U.S. Ambassador to U.S.S.R., John E. Hunt, Representative from N.J. and many citizens of the Soviet Union as gifts conveying the “Spirit of Holly Bush”. The original pencil drawing now hangs on one of the historic walls of the old mansion itself, Holly Bush.

Holly Bush, an 18 room mansion, now known throughout the world as the site of the meeting of U.S. President Johnson and Soviet‘ Premier Kosygin, was built of local New Jersey brown field-stone in 1849 by Thomas and Samuel Whitney, glassmakers of Glassboro. Amid somber oak, bright holly bushes, dogwood and roses, the mid-Victorian gingerbread. 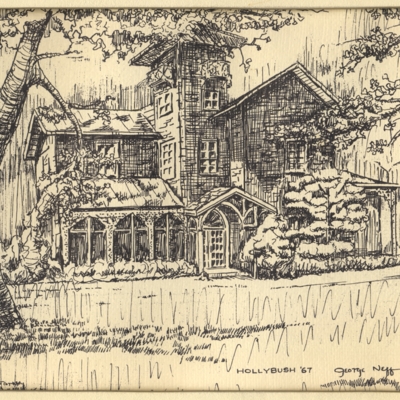